Cameron and Obama hail relations ahead of PM's US visit

Cameron and Obama hail relations ahead of PM's US visit 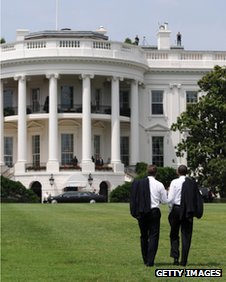 David Cameron and Barack Obama have described the "unique and essential" relationship between the US and UK ahead of a visit by the prime minister to Washington.

In a joint article for the Washington Post, the two leaders said "the world counts on our alliance".

During the three-day trip they will discuss what they call "the next phase of the transition" in Afghanistan.

Tensions over Iran and the violence in Syria will also be high on the agenda. Panerai Radiomir Replica

Mr Cameron made his first official visit to the US as prime minister in July 2010. The latest meeting comes ahead of Nato and G8 summits.

In their joint article, the men said the alliance between the UK and US was "a partnership of the heart, bound by the history, traditions and values we share".

"But what makes our relationship special - a unique and essential asset, for our nations and the world - is that we join hands across so many endeavours.

"Put simply, we count on each other and the world counts on our alliance."

As recent days remind us, this remains a difficult mission”

They continue: "Our troops and citizens have long shown what can be achieved when British and Americans work together, heart and hand, and why this remains an essential relationship - to our nations and the world.

"So like generations before us, we're going to keep it up. Because with confidence in our cause and faith in each other, we still believe that there is hardly anything we cannot do."

On Afghanistan, they said they would be discussing plans for "shifting to a support role in advance of Afghans taking full responsibility for security in 2014".

The visit comes at a tense time for Afghanistan after an American soldier shot dead 16 Afghan civilians.

Mr Obama and Mr Cameron said they were "proud of the progress our troops have made in dismantling al-Qaeda, breaking the Taliban's momentum and training Afghan forces", but "as recent days remind us, this remains a difficult mission".

They also used the article to restate their condemnation of "the Syrian regime's horrific violence against innocent civilians", and vowed to "continue to tighten the noose around Assad and his cohorts".

The pin up of the global left and the leader of the British right will add the latest image to the photo album of the Special Relationship. ”

And on Iran and its growing tensions with Israel over its nuclear programme, they said they believed there was "time and space to pursue a diplomatic solution".

However, as the US and EU imposed sanctions and embargoes on Iran, they said: "The choice for Tehran will be sharpened - meet your international obligations or face the consequences."

BBC political editor Nick Robinson said the most significant conversation between the two men was likely to be about Iran and Israel.

He said that although they had written about a diplomatic solution, the leaders would want to discuss privately what to do if Israel was set on war.

Other topics likely to be discussed include the state of the global economy and international aid.

During the trip, on which Mr Cameron will be accompanied by his wife Samantha, the prime minister will become the first foreign leader to be welcomed aboard the presidential plane, Air Force One, by President Obama.

They will fly together to Ohio - a crucial swing state in this year's presidential election - to watch a game of basketball.