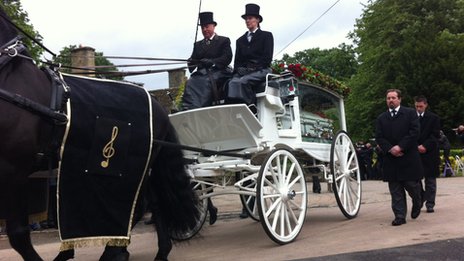 Gibb's body was carried in a horse-drawn carriage, led by a bagpiper
Continue reading the main story

The funeral of Bee Gees singer Robin Gibb is being held in his home town in Oxfordshire.

Hundreds of fans lined the streets of Thame earlier to pay their respects as a lone bagpiper led a procession through the town.

Gibb's body was carried in a horse-drawn carriage, followed by two Irish wolfhounds and guests, including Barry Gibb and broadcaster Paul Gambaccini.

Gibb died from kidney failure in May. He had battled cancer and pneumonia.

The horse-drawn carriage passed through the town before a private church service attended by his family and close friends.

His family said his wish was to say a "final goodbye" to fans and the town. patek philippe replica

Gibb's son Robin-John said the Bee Gees hit I Started A Joke would be played at the church.

His songs have been the soundtrack to my life”

The track Don't Cry Alone, which is one of Gibb's final compositions from his Titanic Requiem - premiered only weeks before his death - will also be played.

The song features the opening lines: "If your heart is breaking, I'm yours whatever, I will not forsake you ever, don't cry alone."

Other guests at the service include musician Peter Andre and actor Leslie Phillips.

Radio presenter Henry Wymbs, who has known the Gibb family for a number of years as Robin's wife Dwina was a fan of his Irish Eye programme, said: "Part of my youth died with him because he created so many of the songs I loved. 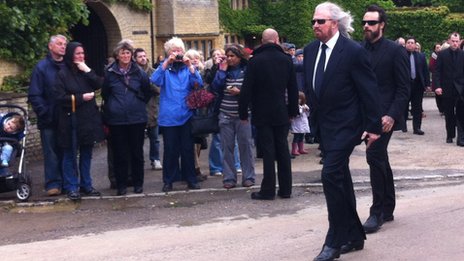 "He was humble, down to earth, a very genuine man who wasn't affected by fame or wealth.

"Apparently he had really become a part of the community in Thame and I can believe that because he was such a nice man."

Mayor of Thame Nigel Champken-Woods said: "He did switch the Christmas lights on a few years ago and he was happy to sign autographs and talk to people."

Bee Gees fan Jill Horton, who has travelled to Thame from Buckingham, said: "We're big fans, the whole family, right through to my four-year-old granddaughter.

"It was their music that was just so special.

Richard Jones, 62, who travelled to Thame from Birmingham, said: "I met him 18 months ago when he was making a documentary about Bomber Command. 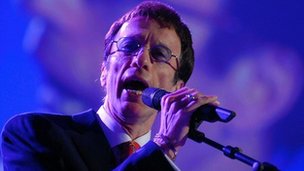 "We both had a ride in a Lancaster and then he spoke to me for 15 to 20 minutes. He didn't try to fob me off, he was a total gentleman.

"His songs have been the soundtrack to my life."

Sonia Chittenden, 62, from Hartley Wintney in Hampshire, who has been a fan of Gibb since she was 16, said: "I first mobbed him on stage at the Royal Albert Hall in London and I got thrown out."

She said she once got his autograph at Heathrow Airport and had been to every concert in the UK.

Gibb also invited her back to his house for a cup of tea after she met him outside a recording studio in London, she said.

Gibb's musical career began when he formed the Bee Gees with brothers Barry and Maurice in 1958.

The group is among the biggest-selling acts of all time, with hits including Stayin' Alive, How Deep Is Your Love, Massachusetts and Night Fever.

They made almost 30 albums and sold more than 110 million records.

Their 1977 soundtrack to the film Saturday Night Fever sold more than 40 million copies worldwide, making it the best-selling movie soundtrack of all time.