“I was slightly worried about my start”

The Jamaican, who holds the world record, finished ahead of countryman Yohan Blake and American Justin Gatlin.

Seven of the eight finalists ran under 10 seconds in what was the fastest Olympic 100m final in history.

But Bolt came home first, clocking the second quickest time in history in front of an 80,000-capacity crowd. 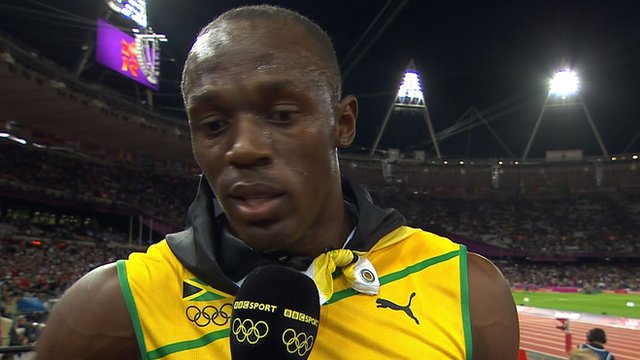 Bolt talks to BBC Sport after his win

Bolt had come into London 2012 with doubts about his fitness and his form, having been beaten by Blake in the Jamaican trials.

But he made it successive Olympic titles in the 100m and can win a further two golds in the 200m and 4x100m relay.

"I was slightly worried about my start," he told BBC Sport. "It was not the best reaction in the world, but I stopped worrying about it and executed it and it worked."

Asked to respond to the doubters, Bolt said: "I'm not concerned. I've said it from the start, people can talk, all they can do is talk. When it comes to the championships, it's all about business to me - and I brought it."

Bolt also praised the atmosphere inside the Olympic Stadium.

"You can feel that energy, so I feel extremely good and I'm happy."

"He was under a bit of pressure, but his technique looked better than it has recently," said Johnson. "It wasn't a great start but it didn't need to be. Bolt is the best there has ever been, there is no doubt about it."

Asafa Powell was expected to be a medal threat but finished last in a time of 11.99 after injuring his groin. No Britons made it through to the final. 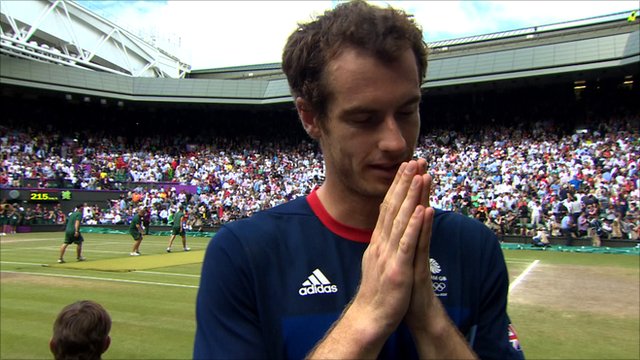 Murray on 'biggest win' of career

And Ben Ainslie became the most-decorated sailor in Games history with his fourth individual gold thanks to victory in Weymouth.

Murray then had to settle for silver in the mixed doubles as he and Laura Robson lost out in the final.

They were beaten 2-6 6-3 10-8 on Centre Court by the Belarusian pair of Max Mirnyi and Victoria Azarenka.

Murray, who became the first British man to win the Olympic singles gold medal since Josiah Ritchie in 1908, described his 6-2 6-1 6-4 victory over Federer as "the biggest win of my life".

"This week has been incredible for me," said the 25-year-old Scot. "The support has been amazing at all of the Olympic events.

"I watched the athletics on Saturday and the way Mo Farah won gave me a boost coming into today."

Earlier, 35-year-old Ainslie claimed yet another gold, admitting it had been "incredibly hard" to win the Finn class ahead of Danish rival and long-time leader Jonas Hogh-Christensen.

"There's a huge amount of pressure to perform at a home Games," said Ainslie. "It's been the hardest couple of weeks of my life, but you just have to get on with the job."

In athletics, Christine Ohuruogu failed to successfully defend her Olympic title in the women's 400m, taking silver behind Sanya Richards-Ross of the United States.

Sailors Iain Percy and Andrew Simpson also took silver when they were edged out by Sweden for gold in the Star class in Weymouth.

In the Sunday morning session at the Velodrome, British cyclist Victoria Pendleton broke the Olympic individual sprint record as she attempted to book a place in Tuesday's final.

So far, about 5.1m spectators have watched the Games, including more than one million visitors to the Olympic Park in Stratford, east London.