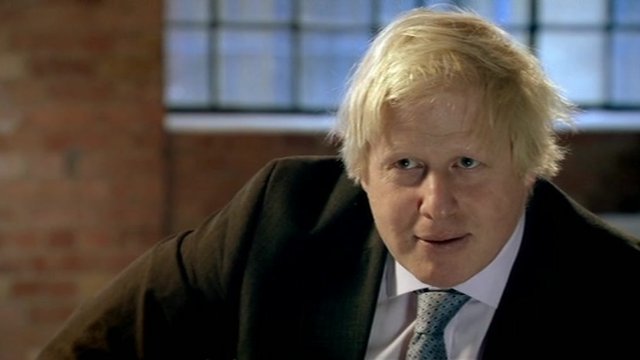 Boris Johnson has admitted that he would like to be prime minister but insists "it's not going to happen".

In a forthcoming BBC Two documentary, the mayor of London says he thinks the job of PM is "very, very tough".

But he will say he would like to "have a crack" at it "if the ball came loose from the back of a scrum".

The mayor has been talked up as a possible future Conservative leader, but he has always said he would see out his second term as mayor until 2016.

Documentary maker Michael Cockerell told the Radio Times that when asked whether he harboured any desires for the top job, Mr Johnson answered: "I think it's a very tough job being prime minister.

"Obviously, if the ball came loose from the back of a scrum - which it won't - it would be a great, great thing to have a crack at,"

"But it's not going to happen."

Mr Johnson's sister Rachel, who also features in the programme says her brother had high ambitions from a young age.

This is a truly shameful vignette of almost superhuman undergraduate arrogance, toffishness and twittishness,”

"As Boris was growing up whenever anyone asked him what he wanted to be, he would answer: 'World King'," she told the programme - Boris Johnson: The Irresistible Rise - to be broadcast later this month.

She also revealed that the mayor, who went to Eton school with David Cameron, still feels a "continuing superiority" over his younger schoolmate.

"When they're together it's rather sweet, because David Cameron - even though he's taller - looks at Boris as if he's still head boy at Eton," she said.

In the documentary, Mr Johnson says he feels embarrassed about his past as a member of the notorious Bullingdon Club, a dining group for ex-public schoolboys at Oxford University, whose members also included Mr Cameron.

"This is a truly shameful vignette of almost superhuman undergraduate arrogance, toffishness and twittishness," he said.

"But at the time you felt it was wonderful to be going round swanking it up. Or was it? Actually I remember the dinners being incredibly drunken." 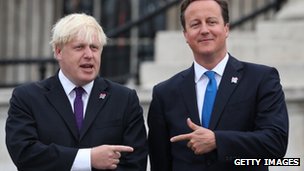 Boris Johnson and David Cameron both went to the same school

Asked about the club's reputation for smashing up restaurants, he admitted: "Yes. And the abiding memory is of deep, deep self-loathing."

Mr Johnson also reveals there is a strategy behind his public persona: "As a general tactic in life, it is often useful to give the slight impression that you are deliberately pretending not to know what's going on - because the reality may be that you don't know what's going on, but people won't be able to tell the difference."

It is not the first time Mr Johnson has spoken about his desire to be prime minister.

In 2005 - at a time when David Cameron was about to become Conservative leader - Mr Johnson told the BBC that it was important for society, "in an evolutionary sense", that politicians believed they could rise to the top.

"I suppose all politicians are like, in the end, crazed wasps in a jam jar, each individually convinced that they are going to make it and get out and survive," he told Desert Island Discs.

"The point is that in a Darwinian way the public needs politicians to want to get as far as they can and that's how I would justify it."